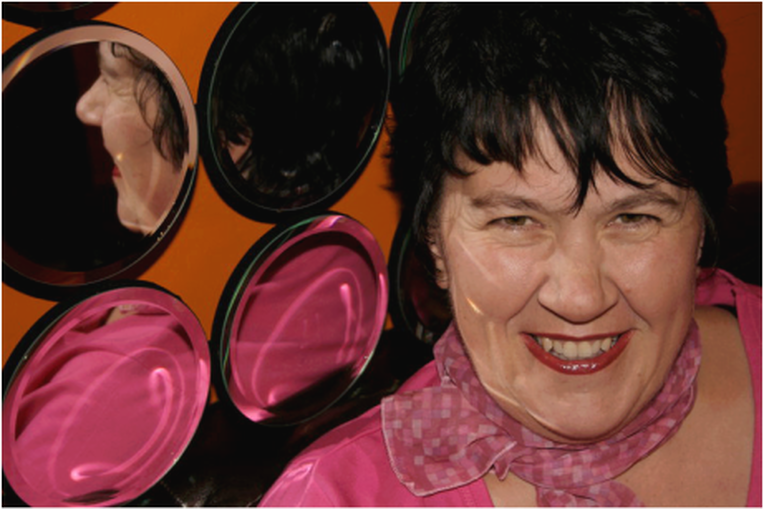 Portrait taken by Black Robin for his exhibition 21: The Last Avant Garde which celebrated 21 years of Disability Art in the North East of England.
Vici Wreford-Sinnott is a disabled theatre director, playwright and equality strategist who has worked in theatre and Disability Arts for almost 30 years. She is Artistic Director of Little Cog, a disabled-led theatre company based in the North of England. She also takes freelance commissions and supports other disabled theatre makers to develop their work.

Vici trained as a theatre director and playwrigt at the University of Kent, gaining a first for her specialist fourth year in directing.

Vici has always championed the equality of disabled people in the cultural landscape, whilst creating strategies for arts organisations and venues to best support disabled artists - there is still a long way to go. She has a body of work entitled a Manifesto for Tricksters which explores aesthetics for change. She is committed to curiosity, physicality and the disability aesthetic, producing fresh, inspiring work which engages, cheers, provokes and creates change. Vici believes in the creation of a cultural landscape, and the structures that uphold it, without limitations.

Vici founded Little Cog, a disabled-led theatre company, in 2011 and has written and directed several productions with the company. She directed Behind the Masque, Matryoshka and produced Dust of the Steet's Shining all by Alison Carr. Vici directed Occupation and Never-Neverland by Pauline Heath. She collaborated with and directed The Lab, Los Muertos, Out of the Shadows and The Keepers with Full Circle Theatre Company , a company of adults with a learning disability. Vici has written and directed The Art of Not Getting Lost, Butterfly, Another England and Lighthouse at ARC Stockton where she is an associate artist. Another England and Butterfly toured nationally and Butterfly was named Best One-Person Play by the British Theatre Guide.

During the global pandemic Vici has been commissioned to make several pieces of work which you can discover more about on the website. ARC Stockton and HOME Manchester commissioned Siege, a 12 minute film which was part of the Homemakers programme. This was followed by a Northern Stage, Little Cog and ARC Stockton commission, Funny Peculiar, another digital piece, which has gone on to feature in 3 interntional film festivals, has been given space on The Space, Thespie and British Council platforms for on-demand viewing. Both Siege and Funny Peculiar will be published in 2021 by Salamander Street. Vici was also commissioned by Duram Book Festival and Lisette Auton through New Writing North for a five minute film poem Before There Was Ownership of Anything - which featured in Lisette's film The River Cycle - Writing The Missing.

Vici is former artistic director of feminist theatre companies cirque des femmes and Sycorax Theatre Company which were based in Co Durham, North East England, and produced a body of successful work which toured and was featured at the Edinburgh Fringe, including Moll Cutpurse – A Comedy for the 21st Century and Deadly Devotchka, both written and directed by Vici.

In 1999 Vici was appointed CEO of Arts and Disability Ireland (a development organisation for the Republic of Ireland) where she produced a series of highly successful Disability Cabarets, introduced a National Mentoring Programme for Disabled Artists and was Artistic Director of the first national disability arts festival in the Republic Of Ireland – Dis/Cover. Whilst in Ireland Vici directed two of the first pieces of Disability Theatre in the Republic, The Baby Doll Project by Rosaleen McDonagh which won a Metro Eireann Multi-Cultural Award, and Broadcast co-devised with Donal Toolan, which was part of the Dublin Fringe Theatre Festival.

In 2003 Vici became director of Arcadea (North East Disability Arts Development Agency) and held the post for six years before setting up her own creative company. The organisation supported the professional development and showcasing of the work of a number of disabled artists. Vici was Artistic Director of the region-wide Mimosa Festival celebrating professional disability art from around the country.